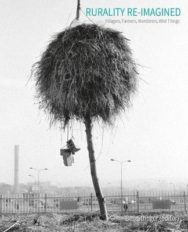 urality Re-imagined is divided into four loosely-themed sections: Villagers, Farmers, Wanderers, and Wild Things. Each comprises five or six diverse chapters of varied length.In the Villagers section rural communities are considered as assemblages and spaces of vernacularity, as dark settings for TV dramas, new wave photography, and as sites for community arts projects.The Farmers section critically re-invigorates the historical fascination with peasantry and farming in the arts, through essays, painting, and photography that collectively place the agency of the artist under as much scrutiny as images of agricultural space and people.Stereotypically, the word ‘Wanderers’ conjures images of gypsy caravans, or country ramblers, but in this section the term is stretched to include not only the traditional migrations of reindeer herds, but also that of the motorway driver, and migrations of cultural forms too, such as that of hip-hop from the clubs of New York to the fields of rural Devon.In the essays and images in the Wild Things section the wilderness emerges as a highly contested cultural terrain, far from any state of purity, as it manifests itself in the behaviours of people, flora, and fauna in cultivated and uncultivated landscapes and parks.

"This sparkling collection of essays, photographs, artwork, creative writing and meditations represents a sustained exploration of and contribution to cultures of the countryside and the liminal spaces of the non-urban. Through it we see the contemporary rural in cultural glimpses and social practices, as we seek to make sense of our desire to escape to or from its diminishing scope. It will be of fascination to today's pastoralists and re-wilders, but it should absolutely be read too by cool artists of the city, urban designers and policy-makers alike, indeed by anyone curious about life and culture in 21st-century landscapes."–George McKay "The writers, designers and artists assembled in Rurality Re-imagined ask us to take seriously the neglected countryside, but not to simply assume that neglect and re-present familiar ideas and ideals of the rural as local in opposition to the urban as global. Through collectively reflecting on their own imaginings, experiences and thinking about rurality, and with a suitably diverse set of case studies, the contributors truly open up rural space for readers. The book's four-fold structure takes us from rural communities and farming practices to rural mobilities and the contested 'wildness' of the countryside. Individual chapters read TV drama, rural tradition, haystacks, hip hop, Leylandii and cruising – and much more besides. Rurality Re-imagined challenges all of us in the 'space design disciplines' (and those beyond, too) to look anew at the rural as a spatial and cultural category, as a representational repertoire, and as lived experience. It is a landmark publication in an emerging 'new rural studies' no longer either romanticized as idyll or written off as backwater, the rural here truly is reimagined in the age of the global village."–David Bell

Ben Stringer teaches architectural design, history and theory at the University of Westminster, London, where he leads a Masters design studio. He is also a trustee of the Oxford City Farm.