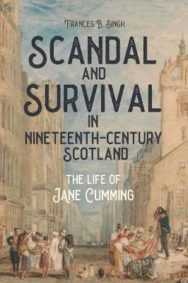 By (author) Frances B. Singh

In 1810 Edinburgh, the orphaned Scottish-Indian schoolgirl Jane Cumming alleged that her two schoolmistresses were sexually intimate. The allegation spawned a defamation suit that pitted Jane’s grandmother, a member of the Scottish landed gentry, against two young professional women who were romantic friends. During the trial, the boundary between passion and friendship among women was debated and Jane was viewed “orientally,” as morally corrupt and hypersexual. Located at the intersection of race, sex, and class, the case has long been a lightning rod for scholars of cultural studies, women’s and gender history, and, given Lillian Hellman’s appropriation of Jane’s story in her 1934 play The Children’s Hour, theater history as well. Frances B. Singh’s wide-ranging biography, however, takes a new, psychological approach, putting the notorious case in the context of a life that was marked by loss, separation, abandonment–and resilience.Grounded in archival and genealogical sources never before consulted, Singh’s narrative reconstructs Cumming’s life from its inauspicious beginnings in a Calcutta orphanage through her schooling in Elgin and Edinburgh, an abusive marriage, her adherence to the Free Church at the time of the Scottish Disruption, and her posthumous life in Hellman’s Broadway play. Singh provides a detailed analysis not only of the case itself, but of how both Jane’s and her teachers’ lives were affected in the aftermath.Frances B. Singh is Professor Emerita at Hostos Community College (CUNY).Frances B. Singh is Professor Emerita at Hostos Community College (CUNY).