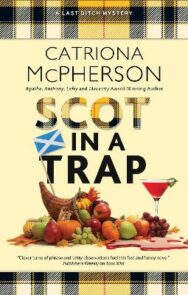 Home > Fiction from Scotland > Scot in a Trap

Scot in a Trap

In this darkly funny mystery Lexy Campbell’s first love turns up dead at the Last Ditch Motel on Thanksgiving . . . and she becomes the prime suspect!A mysterious object the size of a suitcase, all wrapped in bacon and smelling of syrup, can mean only one thing: Thanksgiving at the Last Ditch Motel. This year the motel residents are in extra-celebratory mood as the holiday brings a new arrival to the group – a bouncing baby girl.But as one life enters the Ditch, another leaves it. Menzies Lassiter has only just checked in. When resident counsellor Lexy Campbell tries to deliver his breakfast the next day, she finds him checked out. Permanently. Shocking enough if he was a stranger, but Lexy recognises that face. Menzies was her first love until he broke her heart many years ago.What’s he doing at the Last Ditch? What’s he doing dead? And how can Lexy escape the fact that she alone had the means, the opportunity – and certainly the motive – to kill him?

Reviews of Scot in a Trap

Clever turns of phrase and witty observations fuel this fast and funny novel * Publishers Weekly on Scot Mist * Plenty of suspects and mordant humor against a background of pandemic paranoia * Kirkus Reviews on Scot Mist * The banter among the various characters will draw Janet Evanonvich fans to this engaging, not-quite-a-locked-room mystery * Booklist on Scot Mist * McPherson's witty third Last Ditch mystery has a line on every page to provoke a smile. Anyone who appreciates a good mystery told with nimble, sure-footed humor will have a ball * Publishers Weekly on Scot on the Rocks * Hilarious . A compendium of unusual characters and odd circumstances guaranteed to make you laugh out loud * Kirkus Reviews on Scot on the Rocks *

Born and raised in West Lothian, Catriona McPherson left Edinburgh University with a PhD in Linguistics and worked in academia, as well as banking and public libraries, before taking up full-time writing in 2001. For the last ten years she has lived in Northern California with frequent visits home. Among numerous prizes, she has won two of Left Coast Crime’s coveted Humorous Lefty Awards for the Last Ditch comedies.www.catrionamcpherson.com