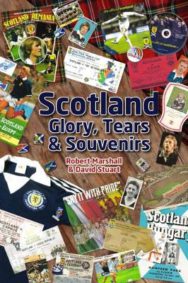 Scotland – Glory, Tears & Souvenirs is an offbeat collection of memories, mementos, rants and aspirations relating to Scotland’s national football team. A ‘look back in hunger’ on the post-war era, with emphasis on the 1970s to date. A reminder of the way football was, the way it is now and the way we’d like it to be! There’s Switzerland 54, Denis Law, trading cards, match programmes, Archie Gemmill, Argentina 78, beermats, Kenny Dalglish, vinyl records, Spain 82, Ally McCoist, the Tartan Army, Italia 90, the Kirin Cup, Jimmy Hill, France 98, Panini stickers and James McFadden. Nostalgia and a warped sense of humour are what gets Scotland supporters through in a nightmare world where all our near-neighbours now get to ‘go to the ball’ – France 2016, at least – while we await the arrival of a Fairy Godmother and a defence that doesn’t leak goals. There’s no room for wallowing in self-pity, though. Read this therapeutic comfort blanket of a book, cheer at the good bits and laugh at the bad. We shall overcome…

Robert Marshall is editor of the Scotland international football magazine, Scotland Epistles. Robert has written for football fanzines since 1989, and is a contributor to Programme Monthly. David Stuart is the co-founder of Scotland Epistles. His football writing lay dormant for almost 20 years following the demise of Partick Thistle fanzine, Sick in the Basin – now mercifully revived!