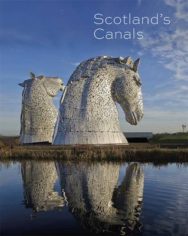 In 1768, construction began on the Forth and Clyde Canal – the start of a series of incredible engineering endeavours which would change the landscape of Scotland forever. The nation’s transport and industry had always relied on the sea rather than the rivers. In the eighteenth and nineteenth centuries, the creation of large scale canals provided new links between the land and the coastal centres. Huge volumes of commercial traffic plied these routes, carrying supplies of coal, iron-ore, stone and agricultural produce. Canals had a major impact on the places they passed through – both Grangemouth and Maryhill in Glasgow were once branded as new ‘canal-towns’. Produced in partnership with Scottish Canals, Nick Haynes’ new book explores the histories of the nation’s five major canals – the Forth and Clyde, Union, Caledonian, Crinan and Monkland – and the buildings that grew up alongside them.From the awe-inspiring engineering feat that drove a route through the lochs and mountains of the Great Glen, linking sea to sea, to the ‘most beautiful shortcut in the world’, Scotland’s Canals explores the fascinating architecture of our iconic waterways, telling a story of innovation, industry, community, decline, disrepair and regeneration.

Nick Haynes is an architectural historian and historic buildings consultant. In 2011 he was the winner of the Yale Pevsner 60th Anniversary Photographic Competition, and he has previously authored Building Knowledge: An Architectural History of the University of Glasgow and Perth and Kinross: An Illustrated Architectural Guide.