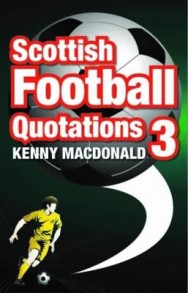 “Scottish Football Quotations 3” is sports journalist Kenny MacDonald’s third volume of quotations about Scotland’s national sport. The book features over 2,000 brand-new quotations in over 60 categories, ranging from sections on personalities like Gordon Strachan, Walter Smith, Alex McLeish, Berti Vogts, Martin O’Neill, Sir Alex Ferguson, and Dick Advocaat to a variety of specific categories – from religion to referees, Scotland to the sack, food to fitness, the Press to players, Europe to excuses, as well as drink, Boozegate, the wife, age, injuries, hobbies and TV. It’s funny, sad, serious and hilarious and will be a key addition to the literature of the country’s favorite pastime and the perfect gift for every football fan.

Kenny MacDonald has been a sports journalist since 1977 and has worked for the Scottish News of the World since 1991, the last 15 of them as Chief Sports Reporter. He has covered Scottish club and international football all over the world but his career highlight – personal rather than professional – was the 1991 Scottish Cup Final. He is married, has two sons, and lives one mile from the front door of Scotland’s National Stadium.