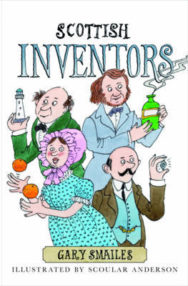 Gary Smailes studied for a master’s degree in Military History before working as a researcher with Horrible Histories writer Terry Deary. He has written eight books on Modern Heroes for Waverley Books and four books about world-famous battles for Franklin Watts. As well as writing, Gary also runs BubbleCow, as company which helps fellow writers get published. He lives in Cheshire. Scoular Anderson has been writing and illustrating children’s books for twenty years. With over 70 books in print he is one of Britain’s most prolific children’s authors. For Birlinn he has written and illustrated the bestselling 1314 And All That and 1745 And All That. He lives near Dunoon.