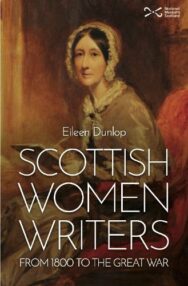 Charlotte Waldie and Christina Keith visited, respectively, Waterloo and Flanders in the immediate aftermath of battle. Another intrepid writer, Emily Graves, wrote a memoir of her travels in Transylvania in The Light Beyond the Forest – from which Bram Stoker directly lifted the most blood-curdling elements of Dracula. Others remembered include literary multi-tasker and businesswoman Christian Isabel Johnstone; playwright Joanna Baillie; working-class poets Marion Bernstein and Janet Hamilton; novelist Susan Ferrier; memoirist Anne Grant of Laggan; and writer and scientist Mary Somerville, depicted on the cover, after whom Somerville College, Oxford is named.

This illuminating book traces the development of Scottish women’s writing in English from its genesis in the late eighteenth century to its flowering in the late nineteenth and early twentieth centuries. Hindered initially by the hostility of the Presbyterian Church and the self-serving attitude of the male hierarchy which denied them a proper education, an astonishing number of women found opportunities, in the midst of domestic obligations, to write, and often publish – novels, poetry, diaries, journalism, letters, essays and reportage.