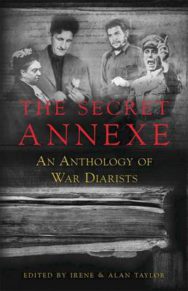 From the team that edited the bestselling The Assassin’s Cloak which has sold over 90,000 copies to date The wartime experiences of over 100 diarists from around the world Published to coincide with Remembrance Day Third party promotion in conjunction with the British Legion under discussion The Secret Annexe brings together – in their own words – the stories of the men and women who have endured wartime life. By turns horrific and comic, the entries retain the candid intimacy that is the particular preserve of the diarist. From the colourful band of contributors – Davy Crockett, Anne Frank, Josef Goebbels, Virginia Woolf, Che Guevara, Anais Nin, Florence Nightingale, Samuel Pepys and Salam Pax to name a few – Irene and Alan Taylor have forged an unprecedented insight into what has been described as ‘the most exciting and dramatic thing in life’ and ‘the universal perversion’, war.

Irene and ALAN TAYLOR, editors of The Assassin’s Cloak, both worked as librarians before exploring other professions. Irene now works for the National Trust for Scotland and Alan is Associate Editor of the Sunday Herald.