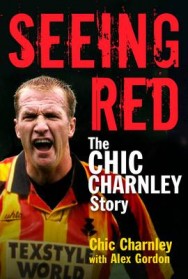 Chic Charnley is one of the most controversial, colorful characters in Scottish football history. Blessed with awesome talent, incredible ability and spectacular skills, he’s the player who could – and should – have been one of the biggest names in sport. But, by his own admission, he blew it. Here he tells all in the most revealing, unputdownable book of the game. The maverick midfielder tells it like it is, including the real reason he did not sign for his boyhood idols Celtic; the genuine regrets of a stormy career that kept him in the headlines for all the wrong reasons; his bad boy image, crazy antics and why he was sent off a record amount of times; how he ruined Henrik Larsson’s Celtic debut; the day he was attacked by a thug with a sword – during training! – and much more. Here, for the first time, “Chic Charnley” talks about the roller coaster career that saw him play for Partick Thistle, Hibs, St. Mirren, Dundee, Ayr, Clydebank, Hamilton and a few others in between. It’s a journey through football with tales as outrageous as the character himself!