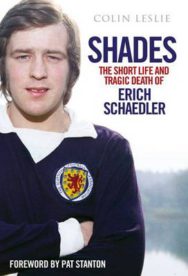 Shades: The Short Life and Tragic Death of Erich Schaedler

Long before the deaths of Wales manager Gary Speed and Germany goalkeeper Robert Enke shocked football, the Scottish game was forced to deal with a numbing death of its own over Christmas 1985. International full-back Erich Schaedler, aged 36, was found dead in a Borders beauty spot, with a shotgun by his side and no suicide note or motive for taking his own life. A straightforward suicide? So it seemed at the time, but family and friends are not so sure, and to this day mystery surrounds his tragic death. Schaedler’s loss was felt deeply in the game. He was one of the fittest, hardest men in Scottish football, and appeared indestructible. Fearless and ferocious as a player but a gentleman and genial character off the pitch, Schaedler stood out from the crowd with his lung-bursting runs, long throw-ins and dedicated fitness. Enjoying a career encompassing clubs such as Stirling Albion, Hibernian’s Turnbull’s Tornadoes team of the 1970s, Dundee, Dumbarton and, of course, the Scotland international team of 1974 World Cup fame, he proved how far hard work and commitment can take a professional sportsman.For the first time, Shades presents an intimate portrait of an incredible man, pieced together by his family, friends, managers, trainers and teammates, who share their memories of a man lost in his prime and a person who enriched the lives of all he knew, both on and off the pitch.

Colin Leslie is Sports Editor at The Scotsman. He has been a print journalist for more than 20 years. He has also collaborated with Wales 1958 World Cup star Mel Charles and legendary goalkeeper John Burridge in producing their autobiographies. He lives and works in Edinburgh, the city of his birth, and has a son and daughter. As a wide-eyed ‘Hibs Kid’ on a stadium tour in the Eighties he came across Erich Schaedler pumping iron alone in the gym, but happy to take a break to sign autographs and chat with the delighted young supporters – this engaging character clearly made a lasting impression.