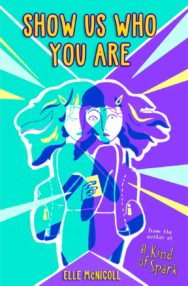 Show Us Who You Are

The second book from the author of A Kind Of Spark, with Neurodivergent characters you’ll root for and a moving friendship at its heart.

When Cora’s brother drags her along to his boss’s house, she doesn’t expect to strike up a friendship with Adrien, son of the intimidating CEO of Pomegranate Technologies. As she becomes part of Adrien’s life, she is also drawn into the mysterious projects at Pomegranate.

At first, she’s intrigued by them – Pomegranate is using AI to recreate real people in hologram form. As she digs deeper, however, she uncovers darker secrets…

Cora knows she must unravel their plans, but can she fight to make her voice heard, whilst never losing sight of herself?

Elle is a Scottish and Neurodivergent writer, happily living in London. She graduated with a first in Creative Writing and has worked as a bookseller, bartender, blogger and babysitter-all while writing stories for her own amusement. After completing her Masters dissertation on the lack of Own Voices representation for Neurodivergent children, she grew tired of the lack of inclusivity in the industry, and wrote a book herself. Her first children’s novel, A Kind of Spark, was published in June 2020 by award-winning indie press Knights Of and stars two openly autistic young women. After publication A Kind Of Spark swiftly became the Blackwell’s Children’s Book of the Month in June and the Waterstones Children’s Book of the Month in October. Additionally, it was announced as both The Times and The Sunday Times‘ Children’s Book of the Week!