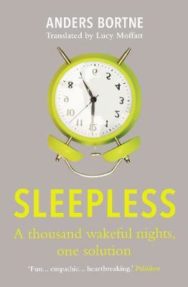 Anders Bortne has a nice life in Oslo. Married to a wonderful woman, with two delightful children, his days are occupied by his creative work. Not all is well though, Anders has been sleepless for sixteen years, and it is taking its toll on his life and his family. No remedy has gone untested: sleeping pills, yoga, herbs, acupuncture, hypnosis, but none has worked.What do we know about the most important hours of the day? What is the history of sleep, and how is our health affected? Sleepless is a book for everyone who lies awake at night and wonders what to do about it. Anders’s last resort was just across the street.

Anders Bortne is a writer and musician who has written five acclaimed books and released eight albums. He has a law degree and currently works as a speechwriter for the Norwegian Minister of Justice. His debut as a writer came in 2005 with the novel A Good Band. His third novel, The Ice Man, was nominated for The Youth Critic`s Prize in 2011. Bortne’s trademark is combining the extraordinary with the trivial, and his work often revolves around family and identity.