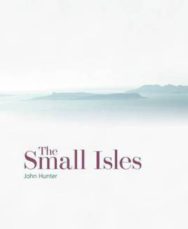 Some ten thousand years ago, hunter-gatherers moving through a landscape newly-emerged from the grip of the last Ice Age reached four islands on the western seaboard. The shores they landed on were deserted. After making camp, they struck out to hunt and explore. We know this because the evidence of their presence has been preserved down the millennia – in traces of flint and quartz, in charred fragments of grain and animal bone, in great heaped piles of ancient shellfish. The islands were Rum, Eigg, Canna and Muck – four distinctive shapes rising from the waters of the Inner Hebrides between Ardnamurchan and Skye. Collectively, they are known as the Small Isles.

From those first moments on, people have been working these islands and using their resources, adapting each landscape to suit the changing needs of the communities they served. In this definitive new book, archaeologist John Hunter searches for the stories of the Small Isles in the evidence that survives – from the fragmentary physical remains of dwellings, defences, places of worship and monuments, to the records of early antiquarians, historians and travellers.

This is a journey to rediscover communities that were erased by the mass migrations of the nineteenth century, and the rise of the Victorian sporting estate. Within a few generations cultural identity on the islands disappeared and a new order developed. Placenames were changed, buildings and structures abandoned, and traditions forgotten. The Small Isles became islands without memories.

This comprehensive guide – illustrated with a wealth of photographs, maps and drawings – takes readers on a tour of both place and time. Crisscrossing the landscapes of four fascinating and evocative islands, it reveals traces of a forgotten past in everything that has been left behind.

John Hunter is Emeritus Professor of Ancient History and Archaeology at the University of Birmingham. He has undertaken extensive survey work in Scotland, with a particular focus on the Northern and Western Isles.