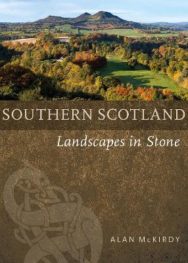 The south of Scotland has a long and turbulent geological past. Perhaps most notably, it marks the place where, 432 million years ago, an ocean, once as wide as the north Atlantic, was compressed by a convergence of ancient lands and then ceased to be.Deserts covered the land with thick layers of brick-red coloured rocks, known as the Old Red Sandstone, piled up and dumped by rivers and streams that crisscrossed the area. Around 432 million years ago, violent explosive volcanic activity gave rise to the prominent landscape features recognised today as the Eildon Hills.In later geological times, the area was blanketed with massive sand dunes, later compressed to create the building stones from which Dumfries, Glasgow and other towns and cities, were constructed.It is also the place where the modern science of geology was born. James Hutton, star of the Scottish Enlightenment, found inspiration from his study of the local rocks. Sites he described almost 250 years ago are still hailed as amongst the most historic and important rock exposures to be found anywhere in the world.

Alan McKirdy has written many popular books and book chapters on geology and related topics and has helped to promote the study of environmental geology in Scotland. He is the author of Set in Stone: The Geology and Landscapes of Scotland and before his retirement he was Head of Knowledge and Information Management at Scottish Natural Heritage. He is now a freelance writer and has given many talks on Scottish geology and landscapes at book festivals and other events across the country.