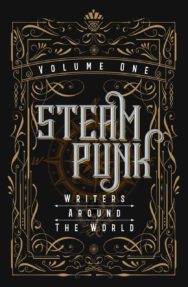 Steampunk Writers Around the World

Steampunk Writers Around the World, is an athology that exemplifies the core idea of bringing people together to creating a global community of writers to share their creativity and passions, despite distance and differences. The product of an annual blogathon, ‘Steampunk Hands around the World’, Steampunk Writers Around the World was created by eleven international authors, featuring authors from Spain (Josué Ramos), Brazil (Fábio Fernandes), Germany (Marcus R. Gilman), Puerto Rico (Aníbal J. Rosario Planas), Hawaii (Ray Dean), Peru (César Santivañez), Africa (Milton Davis), Scotland/India (Suna Dasi), Cuba (Elaine Vilar Madruga), Czech Republic (Petra Slováková), Mexico (Paulo César Ramírez Villaseñor). As a project it encouraged writers to engage with each other and express how the Steampunk movement, though global, is born from the unique culture of its setting; culminating in an inclusive, bilingual publication representing different countries, cultures, and perspectives, with each author sharing their unique, alternate nineteenth-century world.