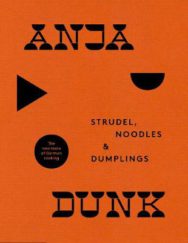 Strudel, Noodles and Dumplings: The New Taste of German Cooking

A celebration of modern German home cooking from Anja Dunk’s young family kitchen.Strudel, Noodles and Dumplings is a long-awaited revival of this underserved national cuisine, proving that there is more to German food than Bratwurst and Black Forest gateau.Anja Dunk’s German food is gently spiced, smoky and deeply savoury. From recipes such as whole-wheat buttermilk waffles to caraway roast pork and red cabbage, quince and apple slaw, her way of cooking is vibrant, honest, quick and deeply intertwined with the seasons and the weather.Featuring over 200 recipes for the everyday family table, as well as for snacks and special occasions, Anja’s cook book is an essential guide to all the basics of German cuisine, providing inspiration for appetising and comforting meals throughout the year.

Anja Dunk was born in Wales to a German mother and a Welsh father. Her childhood was spent predominantly in Wales but also in Germany and South East Asia, where she moved to and from over the early years of her life. Her love of food started at home but has grown since working in cafes and restaurants over the years. She is now a freelance cook, mainly catering for large events and parties.Anja has co-written a book on preserves, Do Preserve: Make your own jams, chutneys, pickles and cordials and runs small preserving workshops.