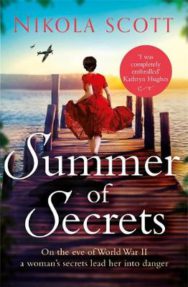 SUMMER OF SECRETS is Nikola Scott’s heart-breaking and unforgettable new novel about two women born decades apart caught up in dark secrets. Not to be missed by readers of Dinah Jefferies and Kate Morton.August 1939. At peaceful Summerhill, orphaned Maddy hides from the world and the rumours of war. Then her adored sister Georgina returns from a long trip with a new friend, the handsome Victor. Maddy fears that Victor is not all he seems, but she has no idea just what kind of danger has come into their lives…Today. Chloe is newly pregnant. This should be a joyful time, but she is fearful for the future, despite her husband’s devotion. When chance takes her to Summerhill, she’s drawn into the mystery of what happened there decades before. And the past reaches out to touch her in ways that could change everything…

Reviews of Summer of Secrets

Born in Germany, Nikola Scott studied English and American literature before moving abroad to work as a fiction editor in New York and London. After over a decade in book publishing, she decided to take the leap into becoming a full-time writer herself. Her debut novel, My Mother’s Shadow, was published in 2017 and has been translated into more than ten languages. Nikola lives in Frankfurt with her husband and two sons.