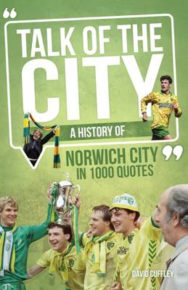 Talk of the City: A History of Norwich City in 1000 Quotes

What is the best-known quote in the history of Norwich City? Decades of drama have produced millions of words of wit, wisdom, fury and folly from a range of great characters including players, managers, directors, supporters, journalists, commentators and celebrities. Now Canaries fans can relive the days of triumph and tragedy, celebration and controversy, fame and near financial ruin through the words of those who made it happen. From Geoffrey Watling’s witty ‘If you fail the medical we’ll sack the doctor’ to Robert Chase’s notorious ‘If Chris Sutton is not here at the start of next season, neither will I be’ and Delia’s legendary ‘Come on, let’s be ‘avin you’, it’s all here in glorious black and white. Find out who were labelled ‘The Milk Tray Man’ and ‘Tweedledum and Tweedledee’, and whose head was shaped ‘like an old threepenny bit’. It’s the story of Norwich City in 1,000 quotes!