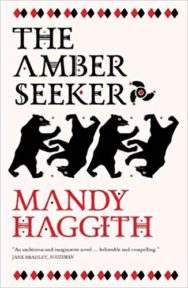 “Northern Britain, Iron Age. Pytheas of Massalia, the famed Greek explorer, roves the icy northern lands of Celtic Britain and beyond, in search of amber and other precious goods. He also craves another encounter with Rian, the slave he fell in love with during a former voyage, who still haunts him. But Rian has other ideas. She has no desire to see Pytheas, and she won’t give up her freedom, without a fight. As Pytheas navigates a world of plundered riches, feuding warlords and an ancient curse, will he succeed in finding what he set out for?

In the second volume of this extraordinary, imaginative trilogy, Mandy Haggith takes us back to prehistoric times for an epic saga ranging from the Sub-Arctic to the Mediterranean. The Amber Seeker revisits the unforgettable cast of characters we met in The Walrus Mutterer, weaving another visceral tale of loss, longing and revenge in 320 BC. ”

Mandy Haggith lives on a wooded coastal croft in Assynt, the part of Scotland that Norman MacCaig called ‘this most beautiful corner of the land’. In spring, summer and autumn shes stays in a tiny caravan down on the shore of Loch Roe, and in winter retreats to a cabin in the woods. The nature she is immersed in is her biggest inspiration.