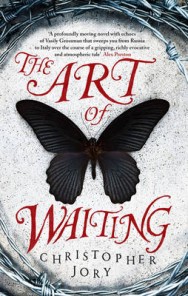 Home > Fiction from Scotland > The Art of Waiting

The Art of Waiting

Russia, 1943. A girl from Leningrad, a soldier from Venice, stand together on the edge of wilderness. He is a shadow of a man, trapped behind wire, an enemy in her land. She takes something from her pocket, slips her hand through the wire, and catches her skin on one of the barbs. Up comes a tiny sphere of blood. ‘Have this,’ the man takes the gift – a small crust of bread, a little piece of hope. Its memory will keep him alive on his long journey home. And when home again, which way will he tip, which sentiment will be strongest? His quiet love for the girl who saved his life, his unfulfilled desire for vengeance, a burning desire to see Fausto Pozzi finally pay the price for the terrible thing that he has done?

Christopher Jory was born in 1968 in Newcastle-upon-Tyne. He spent his early childhood in Barbados, Venezuela and finally Oxfordshire. He did a degree in English Literature and Philosophy at Leicester University and then worked as an English teacher for the British Council and other organisations in Italy, Spain, Crete, Brazil and Venezuela. He is currently a Publisher at Cambridge University Press. His first book, Lost in the Flames (Troubadour, 2011), was a moving account of RAF Bomber Command airmen and their families.