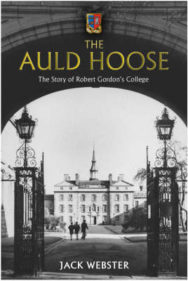 The Auld Hoose: The Story of Robert Gordon’s College

During the late seventeenth and early eighteenth centuries, Aberdonian Robert Gordon made his fortune trading in the Baltic. In his will, he left provision for the founding of a school with live-in accommodation for the sons of his city’s indigents. Originally called the Robert Gordon Hospital, it opened its doors to its first pupils in 1750, celebrated 250 years of existence in the year 2000 and is now a coeducational independent school with an enviable academic record. In this extensive and carefully researched work, Jack Webster charts the history of Gordon’s, as it is affectionately known, from those early days, when just fourteen boys arrived at the Auld Hoose to begin their studies, to the present thriving modern place of education with over 1460 pupils learning everything from Latin to IT. And Robert Gordon himself would be astonished at the range of extracurricular activities now on offer – Analytical Chemistry, Cult TV, Kayaking and Tapestry, to name just four! Then there are the pupils who went on to make names for themselves.Among the college’s most famous FPs are: the Olympic-medal-winning swimmer, Ian Black; the founder of the city’s school of architecture, Scott Sutherland; the chairman of the Wood Group, Sir Ian Wood; Aberdeen FC hero, Martin Buchan; artist Eric Auld; actor David Rintoul of Dr Finlay’s Casebook fame; Robbie Shepherd, Doric aficionado and host of Scottish country dance music radio shows; and, last but not least, two-thirds of the Scotland the What? comedy team, Buff Hardie and George Donald. And what survey of a school’s history would be complete without referring to the teachers? Like all schools, Gordon’s had those who were loved and those who were loathed but it also seems to have had more than its fair share of eccentrics. If they’re in any way worth a mention, they’re here.

Former Gordon’s pupil Jack Webster worked his way up in newspaper publishing to become one of Scotland’s most highly rated columnists, ending his career at The Herald. In 1996, he was voted Newspaper Columnist of the Year. His books include his autobiography Grains of Truth, biographies of Alistair MacLean and Reo Stakis and two books on one of his favourite subjects – Aberdeen FC.