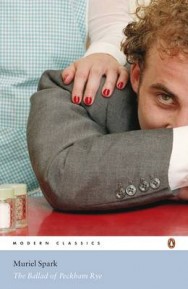 Home > Fiction from Scotland > The Ballad of Peckham Rye

The Ballad of Peckham Rye

A man of devilish charm and enterprising spirit, Dougal Douglas is employed to revitalize the ailing firm of Meadows, Meade & Grindley. He succeeds, but not quite in the way his employer intended. Strange things begin to happen as Dougal exerts an uncanny influence on the inhabitants of Peckham Rye and brings lies, tears, blackmail and even murder into the lives of all he meets, from Miss Merle Coverdale, head of the typing pool, to Beauty, the resident femme fatale, and even Mr Druce, the unsuspecting Managing Director himself.

Muriel Spark (born February 1, 1918) was born in Edinburgh, Scotland. She began writing seriously after the war, beginning with poetry and literary criticism. In 1947, she became editor of the Poetry Review. Her first novel The Comforters was published in 1957, but it was The Prime of Miss Jean Brodie (1962) which established her reputation. After living in New York for some years, she settled in Italy in the late 1960s. She became Dame Commander of the British Empire in 1993.