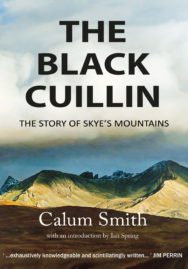 The Black Cuillin, the most rugged mountain range in the UK, forms a continuous chain of narrow ridges, jagged gabbro pinnacles and wild, ice-scoured corries around the basin of Loch Coruisk. The magnetic attraction of the Cuillin has drawn visitors like Boswell and Johnson, Sir Walter Scott, J M W Turner, geologist James David Forbes and Skyeman, Alexander Nicolson who made the first ascent of the highest peak, Sgurr Alasdair. By the late nineteenth century the Sligachan Inn had become a Mecca for members of the Alpine Club and Scottish Mountaineering Club. Norman Collie and local guide, John Mackenzie, were the first to systematically explore the range: ‘Nowhere in the British Isles are there rock climbs to be compared with those in Skye, measure them by what standards you will, length, variety or difficulty.’ This new and exhaustive history of climbing in these hills covers the discoveries and exploits of the pioneers for whom even an ascent of a single peak was a formidable prospect to the athletic rock climbers of more recent generations who flock to these beautiful and challenging mountains.