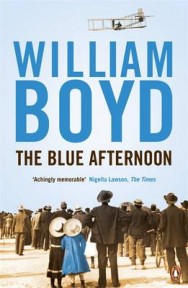 “The Blue Afternoon” is a classic, prize-winning novel by bestseller William Boyd. It is winner of the 1993 Sunday Express Book of the Year Award. Los Angeles 1936. Kay Fischer, a young, ambitious architect, is shadowed by Salvador Carriscant, an enigmatic stranger claiming to be her father. Within weeks of their first meeting, Kay will join him for an extraordinary journey into the old man’s past, initially in search of a murderer, but finally in celebration of a glorious, undying love. “The Blue Afternoon” will be enjoyed by fans of “Any Human Heart” and readers of Ben Macintyre, Sebastian Faulks, Nick Hornby and Hilary Mantel, as well as lovers of the finest fiction around the world. William Boyd has always been described as a great storyteller…”Here he creates a world both elegiac and hopeful, and achingly memorable”. (“The Times”). “A brilliant achievement …has a sense of place and storytelling which you rarely find these days in British novels”. (“Time Out”). “Richly entertaining…Boyd has organized his narrative into one elegant and almost seamless weave”. (“Independent”).William Boyd was born in Ghana, where his father was a doctor, and was educated thereand in Scotland. His first novel “A Good Man in Africa” won both the Whitbread First Novel and Somerset Maugham Prizes, and his subsequent novels have gone onto win many awards. His books include: “On the Yankee Station and Other Stories”, “An Ice-Cream War”, “Stars and Bars”, “School Ties”, “The New Confessions”, “Brazzaville Beach”, “The Destiny of Natalie ‘X’ and Other Stories”, “Armadillo”, “NatTate: An American Artist 1928-1960”, “Any Human Heart”, “Restless”, “The Dreams of Bethany Mellmoth”, “Ordinary Thunderstorms”, “Fascination”, “Bamboo” and “Waiting for Sunrise”. He divides his time between London and south-west France.