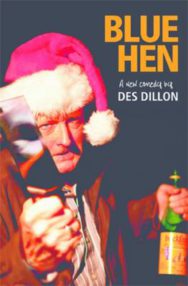 Des Dillon’s dark comedy “Blue Hen” is a gritty moving drama about two men who are out of work and out of patience in the roughest scheme in Coatbridge. But they’ve one thing going for them – the power of their own imaginations. Paddy and John are two ordinary working class guys who are out of work and out of luck when they hit on a scheme to keep them occupied and keep their bellies full. They’re going to rear chickens in their back green and sell the eggs for profit. But it’s not easy being the only honest men in Coatbridge’s roughest scheme and their venture doesn’t exactly go to plan. As their dreams of self-sufficiency crumble, a powerful story of friendship against the odds unfolds.

Internationally acclaimed award winning writer, born in Coatbridge. Studied English Literature. Taught English. Writer-in-Residence at Castlemilk 1998-2000. Stand up Comic, poet, short story writer, novelist, dramatist. TV scriptwriter and screen writer for stage and radio. Published in USA, India, Russia, Sweden, in Catalan, French and Spanish. His novel Me and Ma Gal was included on the list of The 100 Greatest Ever Scottish Books. His play Singin I’m No a Billy he’s a Tim has become an international phenomenon. His latest award was The Lion and Unicorn prize for the best of Irish and British literature in the Russian language (2007).