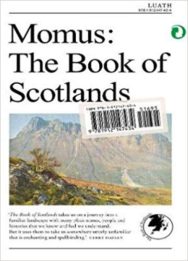 Home > Humour > The Book of Scotlands

The Book of Scotlands

The Book of Scotlands outlines 156 possible Scotlands which currently do not exist anywhere but maybe, someday, could. At a moment when, after centuries of desire and unrest, independence seems to be a real possibility for Scotland, Scottish-born, Berlin-based musician/author/journalist Momus, real name Nick Currie, offers a delirium of visions, practical and absurd. Momus, who describes himself as a polymath-dabbler, suggests that the real Scotland is free to embrace or reject this parallel world.

Nick Currie (born 11 February 1960 in Paisley, Scotland), more popularly known under the artist name Momus (after the Greek god of mockery), is a prolific songwriter, blogger and former journalist for Wired. In his lyrics and his other writing he makes seemingly random use of decontextualized pieces of continental (mostly French) philosophy, and has built up a personal world he says is “dominated by values like diversity, orientalism, and a respect for otherness.” He is fascinated by identity, Japan, Rome, the avant-garde, time travel and sex.