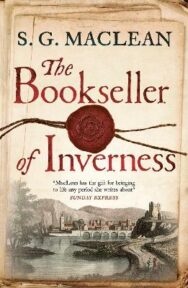 Home > Fiction from Scotland > The Bookseller of Inverness

The Bookseller of Inverness

A GRIPPING HISTORICAL THRILLER SET IN INVERNESS IN THE WAKE OF THE 1746 BATTLE OF CULLODEN.’This slice of historical fiction takes you on a wild ride’ THE TIMESAfter Culloden, Iain MacGillivray was left for dead on Drummossie Moor. Wounded, his face brutally slashed, he survived only by pretending to be dead as the Redcoats patrolled the corpses of his Jacobite comrades.Six years later, with the clan chiefs routed and the Highlands subsumed into the British state, Iain lives a quiet life, working as a bookseller in Inverness. One day, after helping several of his regular customers, he notices a stranger lurking in the upper gallery of his shop, poring over his collection. But the man refuses to say what he’s searching for and only leaves when Iain closes for the night.The next morning Iain opens up shop and finds the stranger dead, his throat cut, and the murder weapon laid out in front of him – a sword with a white cockade on its hilt, the emblem of the Jacobites. With no sign of the killer, Iain wonders whether the stranger discovered what he was looking for – and whether he paid for it with his life. He soon finds himself embroiled in a web of deceit and a series of old scores to be settled in the ashes of war.******************PRAISE FOR THE BOOKSELLER OF INVERNESS’Fresh and intriguing . . . Her best yet’ ANDREW TAYLOR’Everything you could ask for from a historical thriller’ ANTONIA HODGSON’An intricately wrought, compulsively page-turning tale’ CRAIG RUSSELL’A first rate historical thriller’ 5* READER REVIEW’From the moment I began reading I was hooked’ 5* READER REVIEW’Hugely entertaining . . . fast paced, twisting and turning’ 5* READER REVIEW

Reviews of The Bookseller of Inverness

Delivers everything you could possibly want from a historical crime novel, and then gives you a bit more on top. The Jacobites are a perennially fascinating subject, the ultimate forlorn hope of history, and MacLean provides a fresh and intriguing slant on it, clearly based on rock-solid research. She paints a memorable and densely textured picture of post-Culloden Inverness and its surroundings. She's on home ground here, and it shows. Her best yet * Andrew Taylor * The Bookseller of Inverness is everything you could ask for from a historical thriller – gripping, immersive and filled with intriguing characters. S.G. MacLean can make any period sing with life. If you've not read her before, this is the perfect place to start * Antonia Hodgson * S. G. MacLean just goes from strength to strength. The Bookseller of Inverness is an intricately wrought, compulsively page-turning tale of intrigue set in a post-Rebellion Scotland so perfectly conjured and so convincing that you can smell the heather and taste the blood * Craig Russell * Well-written and well-plotted, MacLean is gifted with a writing style that blends literary storytelling with a fast-paced mystery * Scottish Field * This is an expertly plotted crime thriller built around the complexities of Jacobite histories: Walter Scott meets tartan noir * The Times * With its superbly realised scenes and spirited narration, this slice of historical fiction takes you on a wild ride * The Times Audio Book of the Week * An excellent work of historical fiction: rooted in fact … with the imagined characters and situations seamlessly stitched into recorded reality * Literary Review * A gripping and thought-provoking novel. Highly recommended * Historical Novel Review * A twisting, absorbing plot * Sunday Times * A triumphant return to Scotland for S. G. MacLean * Historia *

S.G. MacLean has a PhD in history from Aberdeen University, specializing in sixteenth- and seventeenth-century Scottish history. She has written four highly acclaimed historical thrillers set in Scotland, The Redemption of Alexander Seaton (shortlisted for the CWA Historical Dagger), A Game of Sorrows, Crucible of Secrets and The Devil’s Recruit, and a series of historical thrillers set in Oliver Cromwell’s London. The first and third books in the series, The Seeker and Destroying Angel, have won the CWA Historical Dagger and the second and fourth, The Black Friar and The House of Lamentations were longlisted for the same award. S.G. MacLean is married with four children and lives in Conon Bridge, Scotland. Follow her on Instagram @iwritemybike2