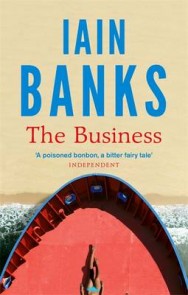 Home > Fiction from Scotland > The Business

Kate Telman is a senior executive officer in The Business, a powerful and massively discreet transglobal organisation. Financially transparent, internally democratic and disavowing conventional familial inheritance, the character of The Business seems, even to Kate, to be vague to the point of invisibility. It possesses, allegedly, a book of Leonardo cartoons, several sets of Crown Jewels and wants to buy its own State in order to acquire a seat at the United Nations. Kate’s job is to keep abreast of current technological developments and her global reach encompasses Silicon Valley, a ranch in Nebraska, the firm’s secretive Swiss headquarters, and a remote Himalayan principality. In the course of her journey Kate must peel away layers of emotional insulation and the assumptions of a lifetime. She must learn to keep her world at arm’s length. To take control, she has to do The Business.