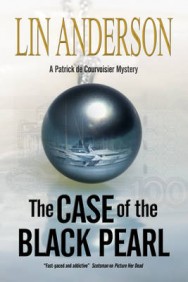 Home > Fiction from Scotland > The Case of the Black Pearl: A Stylish New Mystery Series Set in the South of France

The Case of the Black Pearl: A Stylish New Mystery Series Set in the South of France

Content to leave his controversial past behind him and enjoy a more relaxed, hedonistic lifestyle on a converted houseboat in the glamorous French resort of Cannes, enigmatic Englishman Patrick de Courvoisier is known as ‘Le Limier’ or ‘Fixer’. People come to him with their problems – and he fixes them. However, when Camille Ager asks Patrick to find her sister, Angele Valette, star of the new movie The Black Pearl, Patrick’s laidback lifestyle is dealt a terminal blow. Last seen at the film’s lavish launch party on board the luxurious black yacht owned by Russian oligarch Vasily Chapayev, the funds behind the movie and owner of the famous black pearl, Angele seems to have vanished into thin air – and so has the pearl. As Patrick questions all those involved with the movie, he discovers that this is a case where nothing is as it seems. And when a dead body turns up on his boat, the investigation takes a deeply disturbing new twist.