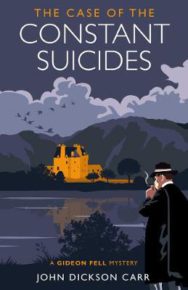 Home > Fiction from Scotland > The Case of the Constant Suicides: A Gideon Fell Mystery

The Case of the Constant Suicides: A Gideon Fell Mystery

Having lost all his money in hare-brained get-rich-quick schemes, old Angus Campbell has nothing to leave his heirs but the proceeds of his lifeinsurance policies. After he falls to his death from a locked bedchamber in the tower of Shira Castle in the Scottish Highlands, his family gather.They are joined by amateur sleuth Dr Gideon Fell, who tries to solve the mystery. Is it suicide, or is it murder?From Shira to Glencoe Gideon Fell trains his forensic intelligence on trying to discover the truth behind events. In the meantime a tabloid pressreporter endlessly falls foul of the redoubtable lady of the house, two young people fall in love while arguing incessantly, and a cast of localscome and go as if this is all a normal days occurrence. And all the while bodies continue to pile up . . .The Case of the Constant Suicides is a masterfully plotted locked-room mystery from the master of the art.

Robert J. Harris was born in Dundee and studied at the University of St. Andrews where he graduated with a first class honours degree in Latin. He is the designer of the bestselling fantasy board game Talisman and has written numerous books, including Leonardo and the Death Machine, Will Shakespeare and the Pirate’s Fire, and the popular World Goes Loki children’s series. He is the author of The Thirty-One Kings: Richard Hannay Returns, a continuation of John Buchan’s classic adventure series. He lives in St. Andrews with his wife, Debbie.John Dickson Carr was born in 1906 in Uniontown, Pennsylvania, the son of a lawyer. While at school and college, he wrote ghost, detective and adventure stories. After studying law, he headed to Paris in 1928. Once there, he lost any desire to study law and soon turned to writing crime fiction full-time. His first novel, It Walks by Night, was published in 1930. Two years later, he moved to England with his English wife; thereafter he became a prolific author and became a master of the locked-room mystery. He also wrote a biography of Sir Arthur Conan Doyle, radio plays, dozens of short stories, and magazine reviews. He died in 1977 in South Carolina.