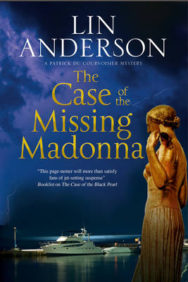 Home > Fiction from Scotland > The Case of the Missing Madonna: A Mystery with Wartime Secrets

The Case of the Missing Madonna: A Mystery with Wartime Secrets

Private investigator Patrick de Courvoisier unearths a shocking wartime secret in this stylish Cannes-based mystery series. Brother Robert from the abbey on St Honorat, a picturesque island off the French coast, has requested Patrick de Courvoisier’s help in locating a valuable painting which has disappeared from the monastery’s vaults. At the same time, an old enemy from Patrick’s past has arrived in Cannes in search of a different stolen painting. As it becomes increasingly clear that the two investigations are linked, Patrick’s enquiries lead him to uncover a shocking wartime secret: a secret the British Royal family would prefer to keep hidden…

Reviews of The Case of the Missing Madonna: A Mystery with Wartime Secrets

"The Case of the Missing Madonna is a slick thriller with fast cars, pretty women, picturesque locations and heart-stopping action sequences." — crimereview.co.uk "Filled with double-crosses, fast-paced action, and the requisite beautiful woman, this is sure to entertain those who like their martinis stirred, not shaken" Booklist "Full of fascinating history and lush descriptions of the French Riviera, this whodunit will snare readers from the opening page" Publishers Weekly "An exciting read for fans of Matthew Reilly, Lee Child, or Joseph Finder" Library Journal "Courvoisier is what I like to call a 'Houdini Hero', he gets into seemingly impossible situations and manages to extricate himself with aplomb. But he seldom seems to lose his humanity. If you are a lover of this genre you'd be hard pressed not to enjoy it." — Breakaway Reviewers