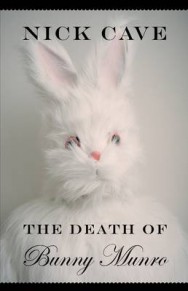 Home > Fiction from Scotland > The Death of Bunny Munro

The Death of Bunny Munro

The Death of Bunny Munro recounts the last journey of a salesman in search of a soul. Following the suicide of his wife, Bunny, a door-to-door salesman and lothario, takes his son on a trip along the south coast of England. He is about to discover that his days are numbered. With a daring hellride of a plot The Death of Bunny Munro is also a modern morality tale of sorts, a stylish, furious, funny, truthful and tender account of one man’s descent and judgement. The novel is full of the linguistic verve that has made Cave one of the world’s most respected lyricists. It is his first novel since the publication of his critically acclaimed debut And the Ass Saw the Angel twenty years ago.

Reviews of The Death of Bunny Munro

'Put Cormac McCarthy, Franz Kafka and Benny Hill together in a Brighton seaside guesthouse and they might just come up with The Death of Bunny Munro. As it stands though, this novel emerges emphatically as the work of one of the great cross-genre storytellers of our age; a compulsive read possessing all Nick Cave's trademark horror and humanity, often thinly disguised in a galloping, playful romp.' Irvine Welsh

The lead singer of The Birthday Party, The Bad Seeds and Grinderman, Nick Cave has been performing music for more than 30 years. He has collaborated with Kylie Minogue, PJ Harvey and many others. As well as working with Warren Ellis on the soundtrack for the film of The Road by Cormac McCarthy and The Assassination of Jesse James by the Coward Robert Ford, he also wrote the screenplay for the film The Proposition. His debut novel And the Ass Saw the Angel was published in 1989. Born in Australia, Cave now lives in Brighton.