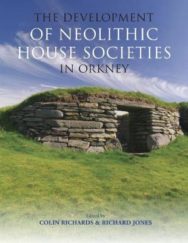 The Development of Neolithic House Societies in Orkney

Considering that Orkney is a group of relatively small islands lying off the northeast coast of the Scottish mainland, its wealth of Neolithic archaeology is truly extraordinary. An assortment of houses, chambered cairns, stone circles, standing stones and passage graves provides an unusually comprehensive range of archaeological and architectural contexts. Yet, in the early 1990s, there was a noticeable imbalance between 4th and 3rd millennium cal BC evidence, with house structures, and ‘villages’ being well represented in the latter but minimally in the former. As elsewhere in the British Isles, the archaeological visibility of the 4th millennium cal BC in Orkney tends to be dominated by the monumental presence of chambered cairns or tombs.In the 1970s Claude Levi-Strauss conceived of a form of social organisation based upon the’house’ – societes a maisons – in order to provide a classification for social groups that appeared not to conform to established anthropological kinship structures. In this approach, the anchor point is the ‘house’, understood as a conceptual resource that is a consequence of a strategy of constructing and legitimising identities under ever shifting social conditions.Drawing on the results of an extensive programme of fieldwork in the Bay of Firth, Mainland Orkney, the text explores the idea that the physical appearance of the house is a potent resource for materialising the dichotomous alliance and descent principles apparent in the archaeological evidence for the early and later Neolithic of Orkney. It argues that some of the insights made by Levi-Strauss in his basic formulation of societesa maisons are extremely relevant to interpreting the archaeological evidence and providing the parameters for a ‘social’ narrative of the material changes occurring in Orkney between the 4th and 2nd millennia cal BC.The major excavations undertaken during the Cuween-Wideford Landscape Project provided an unprecedented depth and variety of evidence for Neolithic occupation, bridging the gap between domestic and ceremonial architecture and form, exploring the transition from wood to stone and relationships between the living and the dead and the role of material culture. The results are described and discussed in detail here, enabling tracing of the development and fragmentation of societes a maisons over a 1500 year period of Northern Isles prehistory.

Colin Richards is Professor of World Prehistory in the Deaprtment of Archaeology at the University of Manchester where he mainly specialises in Neolithic archaeology, architecture and monumentality and ethnoarchaeology, with specific interests in Orkney and Easter Island. Richard Jones is Honorary Lecturer in the Department of Archaeology, University of Glasgow. In addition to his work in Orkney his main research interests in archaeological geophysics, pottery technology and function, and non-destructive techniques in the analysis of archaeological materials.