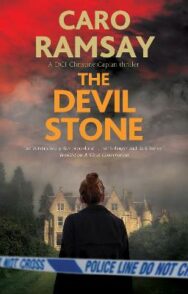 A macabre massacre of a wealthy family brings DCI Christine Caplan to the Highlands in her first thriller in a new series!In the small Highland village of Cronchie, a wealthy family are found brutally murdered in a satanic ritual and their heirloom, ‘the devil stone’, is the only thing stolen. The key suspects are known satanists – case closed? But when the investigating officer disappears after leaving the crime scene, DCI Christine Caplan is pulled in to investigate from Glasgow in a case that could restore her reputation.Caplan knows she is being punished for a minor misdemeanour when she is seconded to the Highlands, but ever the professional, she’s confident she can quickly solve the murders, and return home to her fractious family. But experience soon tells her that this is no open and shut case.She suspects the murder scene was staged, and with the youngest heir to the family missing, there is something more at play than a mythical devil stone. As she closes in on the truth, it is suddenly her life, not her reputation that is danger! Will Caplan’s first Highland murder case be her last?

Reviews of The Devil Stone

The plot is fast-moving and complex, the characters quirky, with plenty of foibles, and the outcome is both satisfying and surprising * Booklist on On an Outgoing Tide * Intricately plotted . This riveting police procedural is sure to please fans and newcomers alike * Publishers Weekly on On an Outgoing Tide * A multi-faceted plot, complex characters, and plenty of suspense * Booklist on The Red, Red Snow * An attention-grabbing procedural with unsettling surprises * Kirkus Reviews on The Red, Red Snow * This is both an outstanding police procedural and a complex and intense psychological cop drama, with danger and dark humor that also shows the vulnerability and resilience of human beings in the face of unspeakable tragedy * Booklist on The Silent Conversation *

Caro Ramsay was born and brought up in Glasgow, and now lives in a village on the west coast of Scotland. She is an osteopath, acupuncturist and former marathon runner, who devotes much of her time to the complementary treatment of injured wildlife at a local rescue centre. She is the author of twelve previous Anderson & Costello thrillers and one standalone novel of psychological suspense. This is the first DCI Christine Caplan thriller.