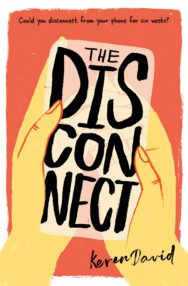 Could you disconnect from your phone for six weeks? Six weeks without sharing photos, without group messages, without being kept in the social‑media loop?

An eccentric entrepreneur has challenged Esther’s year group to do just that, and the winners will walk away with £1,000. For Esther, whose dad and sister live thousands of miles away in New York, the prize might be her only chance to afford flights for a visit… But can she really stay disconnected long enough to win?

Information for Adults: This book has a dyslexia-friendly layout, typeface and paperstock so that even more readers can enjoy it. It has been edited to a reading age of 8. It features a removable ‘super-readable’ sticker.

Keren David worked as a news reporter and feature writer before publishing her compelling debut YA novel, When I Was Joe, while taking a course in Writing for Children at City University. Keren now teaches the City University course. When I Was Joe won numerous awards and a nomination for the Carnegie Medal and shortlisting for the Branford Boase award.