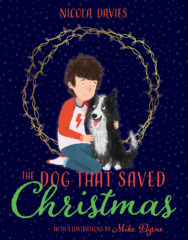 The Dog That Saved Christmas

Jake is different from the other kids at school. He struggles when routines change and people’s emotions are so hard to understand. Christmas can be even worse and often the festivities are just too much to bear. But when Jake finds a little dog lost in the street he unlocks a connection he’s never had before. Together Jake and Susan form a special bond that helps him to understand the world around him, changing his life for the better. Particularly suitable for struggling, reluctant or dyslexic readers aged 8+.

Nicola Davies is a hugely popular writer, renowned for her bestselling nature writing and children’s fiction. Her many books for children include Ice Bear, Big Blue Whale, The Promise and the critically acclaimed King of the Sky, which has been shortlisted for the Greenaway Medal. Nicola has been nominated for and won numerous awards including the UKLA Award, the Little Rebels Children’s Book Award and the IBW Children’s Book Award. She is a zoology graduate, an expert in whales and bats, and has worked for the BBC Natural History Unit.

Mike Byrne grew up on the Wirral near Liverpool before moving to Wales to study Illustration at Glyndwr University. He began his career as a designer for a greetings card company and then became a studio manager for a licensed stationery designer before leaving to fulfil his dream of illustrating children’s books. Mike now lives in Surrey with his wife, cat and son where he spends his days doodling and illustrating children’s books fuelled only by tea and biscuits.