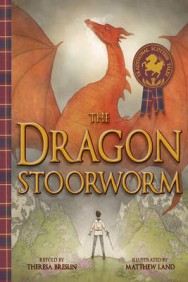 The Dragon Stoorworm was the very first, very worst dragon that ever lived. It was ginormous: almost as big as the whole of Scotland! The King of Scotland called for warriors to defeat the terrible dragon and save his daughter, the Princess Gemdelovely, from being eaten. But none who faced the dragon ever returned, until…Gentle Assipattle is no warrior, but maybe together, he and Princess Gemdelovely can free Scotland from the wrath of the Dragon Stoorworm. A lively retelling of the traditional Scottish folk tale of the Dragon Stoorworm (or Mester Stoor Worm), which explains the origins of Scotland’s many islands, adapted for a young audience. Award-winning author Theresa Breslin’s story unfolds with wry humour while Matthew Land’s magical illustrations capture the fairy-tale beauty of Scotland. The Dragon Stoorworm is one of the first titles released in the new Picture Kelpies: Traditional Scottish Tales range of picture books that bring classic Scottish folk and fairy tales to life for young children.

Reviews of The Dragon Stoorworm

'A stunning new range of children's books landed on our doorstep just before we disappeared on holiday for two weeks. So we spirited them away with us and have been enthralled by them… We're not here to tell you the ending of this fantastic tale, but to let you discover this wonderful range for yourself. Picture Kelpies combine brilliant traditional tales with utterly stunning artwork (it's amazing to think that this is Matthew Land's first picture book – the man has a bright future ahead of him!)' — ReadItDaddy 'Beautiful books which are a great introduction to the folklore genre… Wonderful stories which will give children a real sense of Scottish culture.' — Creative Steps

Theresa Breslin is the critically acclaimed author of over 30 books for children and young adults. She lives near Glasgow, Scotland. Her work has been filmed for television, broadcast on radio, and is read world-wide in many languages. Her novels have won many literary prizes including the Carnegie Medal. Floris Books published Theresa’s stunning story collection An Illustrated Treasury of Scottish Folk and Fairy Tales, illustrated by artist Kate Leiper, in 2012. Matthew Land is an illustrator currently living on a dairy farm in the Welsh hills. Since graduating with a degree in illustration from University College Falmouth in 2012, he has interspersed his illustration with travelling the world. The Dragon Stoorworm is his first picture book.