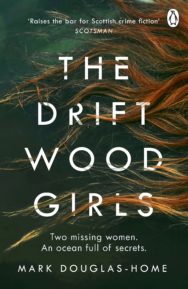 The Driftwood Girls (The Sea Detective)

Two missing women. Two decades apart. A gripping and atmospheric mystery that journeys from the dramatic lochs of Scotland to the icy depths of the North Sea . . .

Kate and Flora Tolmie have always lived with a mystery: what happened to their mother, Christina?

23 years ago, she vanished without a trace from coastal northern France, leaving her young daughters orphaned and alone.

But now Flora is also missing. In desperation, Kate searches her Edinburgh house, and finds a piece of notepaper with just one name: Cal McGill.

Cal is a so-called sea detective, an expert on the winds and the tides, and a gifted finder of lost things – and lost people.

Kate hopes that Cal might not only find her sister, but also unlock the mystery that has overshadowed both women’s lives: what happened to their beloved mother all those years before?

Unfortunately, Cal doesn’t think he can help. But that’s only because he hasn’t yet realised that the dark undercurrents of the case will ultimately lead him back dangerously close to home . . .