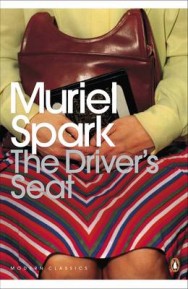 Lise has been driven to distraction by working in the same accountants’ office for sixteen years. So she leaves everything behind her, transforms herself into a laughing, garishly-dressed temptress and flies abroad on the holiday of a lifetime. But her search for adventure, sex and the obsessional experience takes on a far darker significance as she heads on a journey of self-destruction. Infinity and eternity attend Lise’s last terrible day in an unnamed southern city, as she meets her fate.

Muriel Spark (born February 1, 1918) was born in Edinburgh, Scotland. She began writing seriously after the war, beginning with poetry and literary criticism. In 1947, she became editor of the Poetry Review. Her first novel The Comforters was published in 1957, but it was The Prime of Miss Jean Brodie (1962) which established her reputation. After living in New York for some years, she settled in Italy in the late 1960s. She became Dame Commander of the British Empire in 1993. John Lanchester was born in Hamburg in 1962. His first novel, THE DEBT TO PLEASURE, published by Picador in 1996, won the Whitbread First Novel Award, the Betty Trask Prize and the Hawthornden Prize. His second novel, MR PHILLIPS (Faber), was published in 2000 and was hailed as a “postmodern Ulysses”. FRAGRANT HARBOUR, his third novel, was published by Faber in 2002. His work has been translated into 21 languages. John Lanchester has recently delivered a memoir, FAMILY ROMANCE, which will be published by Faber in the spring of 2007.