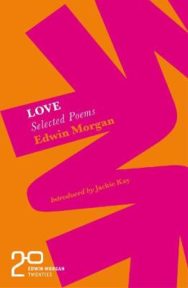 Introduced by Jackie Kay, this selection of poems include the famous ‘Strawberries’ and ‘One Cigarette’ and four from Morgan’s autobiographical sequence, Love and a Life – love in all its aspects.

Edwin Morgan (1920-2010) became Scotland’s first National Poet, or Makar, in 2004. His poetic output was hardly dimmed by increasing age; Collected Poems (Carcanet, 1990) and Collected Translations (Carcanet, 1996) were succeeded by several later volumes of poetry, including Dreams and Other Nightmares (Mariscat Press, 2010). He was awarded the Queen’s Gold Medal for Poetry in 2000.Jackie Kay was born in Edinburgh. She is the third modern Makar, the Scottish poet laureate. A poet, novelist and writer of short stories, she has enjoyed great acclaim for her work for both adults and children. She is Professor of Creative Writing at Newcastle University, and divides her time between Glasgow and Manchester, where she is currently Chancellor of the University of Salford