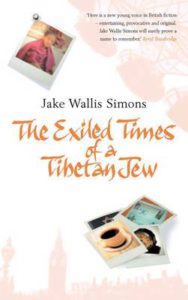 Home > Fiction from Scotland > The Exiled Times of a Tibetan Jew: A Tragicomedy

The Exiled Times of a Tibetan Jew: A Tragicomedy

The novel centres on a colourful group of refugee Tibetans. One of the group’s members, the charismatic (and slightly dubious) Rabbi Chod, recognises himself as the reincarnation of Moses, and various friends as reincarnations of key Biblical figures. Despite condemnation from both the mainstream Jewish and Tibetan communities, he declares his followers the true ‘lost tribe of Israel’, and defiantly opens up a synagogue in a pet shop. The action is seen through the eyes of the narrator, Monlam, who is born into a family where suppression and dysfunction are common currency. Both of his parents are Tibetan Jews, followers of Rabbi Chod. His father owns a cafe called ‘Hush Hush’, so called because within the cafe, all forms of noise are forbidden. Any customer who speaks is instantly banned and a Polaroid photo of them is pinned to a cork board in case they should dare to return. Monlam himself lives an extraordinary life; as each day goes by, he makes his way not into the future, but the past. He falls asleep each night only to wake up the day before. In this way, as he grows up his parents get younger.By the end of the book his parents are children – too young to manage by themselves – and the adult Monlam has to look after them. In this way he witnesses his own family history, quite literally living backwards into their lives.

Jake Wallis Simons is 25 years old and lives in North London. He is the oldest of five children; his father is a TV director and his mother is a teacher. He has a rich and varied ethnic background – his blood resembles a unique Burmese/English/Scottish/Jewish cocktail. Some of his siblings have chosen to follow the Jewish faith, and some have not; Jake himself left Judaism behind several years ago. Before going to university, he lived in Taiwan for two years, where he studied Mandarin Chinese. After that, he went to Oxford, where he read English, and was subsequently awarded one of the top degrees there. Alongside his university studies, he developed a fascination with Buddhism, and has been studying and practicing it ever since. He currently works in a Buddhist centre, a bookshop and for a literary agent. This is his first novel.