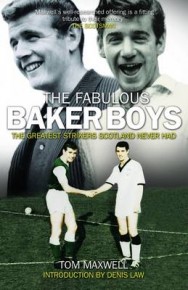 The Fabulous Baker Boys: The Greatest Strikers Scotland Never Had

With a total of more than 500 goals in careers that saw them turn out for the likes of Hibernian, St Mirren, Arsenal, Chelsea, Manchester City and Torino, Joe and Gerry Baker are two of the greatest strikers Scotland never had. While Liverpool-born Hibs legend Joe became the first man to make his England debut having never played in the English league, his US-born brother Gerry, a hero of St Mirren’s Scottish Cup-winning side of 1959, was the first top-flight European footballer to turn out for the USA. Even though he spoke with a broad Scottish accent, Joe was in Alf Ramsey’s initial squad for the 1966 World Cup. With unprecedented access to the Baker family archives, including contributions from Gerry Baker and the late Joe’s son Colin, The Fabulous Baker Boys is a unique tale of Scotland’s most celebrated sporting siblings and contains exclusive interviews with the likes of Denis Law, Lawrie Reilly, John Robertson, Alex Young, Pat Stanton, Bob Wilson and George Eastham.

Tom Maxwell, born in Edinburgh, was brought up in Berwick-upon-Tweed and became a lifelong fan of Berwick Rangers, the subject of his first book, The Lone Rangers – An English Club’s Century in Scottish Football (2011). A freelance journalist based in Midlothian, Tom’s journalism has been widely published, particularly in Scotsman Publications, and in The Times. The Lone Rangers was critically acclaimed in the media and by sports fans – Phil Shaw, writing in Backpass, described it as ‘A strong contender for best football book of the year’.