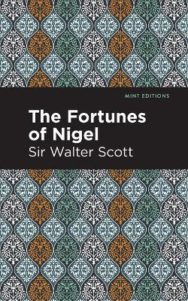 Home > Fiction from Scotland > The Fortunes of Nigel

The Fortunes of Nigel

Nigel Olifaunt, a Scottish nobleman, travels to England to collect a debt on his late father’s behalf, but is ultimately met with deception and disappointment. The Fortunes of Nigel is one man’s tumultuous journey to keep what’s rightfully his. Following his father’s death, Nigel Olifaunt leaves his native Scotland for London, England. He plans to meet with King James VI to recoup the money his family originally lent to the crown. Despite a legitimate claim, the king is initially reluctant to pay what is owed. He placates Nigel, while other members of his court scheme to steal his estate. With the help of Margaret Ramsay, Nigel uncovers a heinous plot to attack his reputation and fortune. Sir Walter Scott delivers an intricate tale of greed and politics in The Fortunes of Nigel. This exhilarating story is infused with vibrant characters and historical context. It’s one of Scott’s most insightful and complex novels. With an eye-catching new cover, and professionally typeset manuscript, this edition of The Fortunes of Nigel is both modern and readable.

Sir Walter Scott (1771-1832) was a Scottish novelist, poet, playwright, and historian who also worked as a judge and legal administrator. Scott’s extensive knowledge of history and his exemplary literary technique earned him a role as a prominent author of the romantic movement and innovator of the historical fiction genre. After rising to fame as a poet, Scott started to venture into prose fiction as well, which solidified his place as a popular and widely-read literary figure, especially in the 19th century. Scott left behind a legacy of innovation, and is praised for his contributions to Scottish culture.