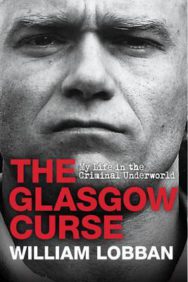 This chilling and disturbing memoir tells the story of one of Glasgow’s most notorious criminals. In his own words, William Lobban tells how he was born in Exeter Prison to a violent, schizophrenic mother. His upbringing in the East End of Glasgow was just as bleak, and he ended up in care, destined for a life of violence and insecurity. Aged only 15 he masterminded a daring break-in to a Glasgow pub, and many years of armed robberies, dealing class A drugs and gang fights followed. When he wasn’t causing mayhem on the streets, Lobban was serving terms in various young offenders’ institutions and prisons, where he was involved in some of the most serious prison riots of recent years. In the course of his criminal career Lobban became closely associated with the infamous Paul Ferris, who was later to incriminate him as the murderer of fellow gangster Arthur Thompson Jr. Police also believed that Lobban was the man behind the brutal double killing of Bobby Glover and Joe ‘Bananas’ Hanlon, but none of these charges was made to stick.Finally released from prison in 1998, Lobban decided to walk away from a life of crime, but at first it proved impossible for him to break the way of life that had moulded him, and only in recent years has he found a measure of peace and stability. In this searing expose of the Glasgow underworld he reveals the true facts behind those crimes which he really committed, and those of which he is falsely accused.

William Lobban, after a harrowing upbringing in Glasgow, embarked on a life of crime which is detailed in this book. Released from prison 14 years ago, he has turned his back on crime ever since. He now lives in the Highlands of Scotland.