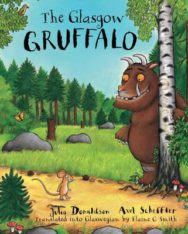 The Glasgow Gruffalo: The Gruffalo in Glaswegian

Everybody loves The Gruffalo and now you can enjoy this children’s classic for the very first time in Glaswegian! Translated by Elaine C. Smith and published by Itchy Coo, this new edition of The Gruffalo will delight both children and adults alike.Julia Donaldson and Axel Scheffler’s The Gruffalo has become a bestselling phenomenon across the world. This award-winning rhyming story of a mouse and a monster is now a modern classic, and will enchant children for years to come.

Julia Donaldson, the 2011-2013 Children’s Laureate, is the outrageously talented, prize-winning author of the world’s most-loved picture books including The Gruffalo and What the Ladybird Heard. The Gruffalo, illustrated by Axel Scheffler, is now a children’s classic and publishing phenomenon; celebrating 15 years in 2014, selling over 3 million copies worldwide, was voted Great Britain’s favourite bedtime story on BBC Radio 2 and was adapted and broadcast as an animation on BBC 1.Motherwell’s favourite daughter, Elaine C. Smith is one of Scotland’s most recognisable actresses and comediennes. Having made her TV debut in Naked Video, it wasn’t long before she secured a role in Rab C. Nesbitt, which would go on to be the role she is best known for. More recently Smith has continued her stage work, touring the UK with The Calender Girls and is involved in numerous charities. She also has a weekly column in The Sunday Mail.