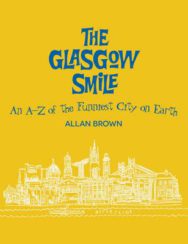 Home > Humour > The Glasgow Smile: A Celebration of Clydebuilt Comedy

The Glasgow Smile: A Celebration of Clydebuilt Comedy

Few cities can rival Glasgow for their contribution to the history of British humour. From the gladiatorial atmosphere of the old Empire Theatre,dubbed the ‘graveyard of English comics’, to the front-page controversies of Frankie Boyle today, the city and its citizens have trademarked their own two-fisted brand of confrontational, but always hilarious, comedy. In this, the first dedicated overview, Allan Brown gives a historical,kaleidoscopic and encyclopedic account of the people, places, performers and procedures that have made Glasgow a by-word for a certain kind of rough, tough quick-wittedness. Every facet of Glaswegian life is considered, viewed through the prism of the city’s sense of humour; from the showbiz renown of Billy Connolly and Chic Murray, Kevin Bridges and Boyle, to the occasions the lighter side was seen in Glasgow’s history of television, film, literature, football,law, science, academe, crime and art. Through profiles, criticism, tales and anecdotes, The Glasgow Smile – fittingly also the term for infamousGlasgow gang punishment – is a treasury of the city’s past and present, and of its own very particular approach to the absurd.

Allan Brown was born and bred in Glasgow. A former Scottish Journalist of the Year, he has worked in newspapers since 1990. He was writer and columnist with the Scottish edition of The Sunday Times for many years, as well as its restaurant critic. He is also author of the highly acclaimed Inside the Wicker Man: How Not to Make a Cult Classic.