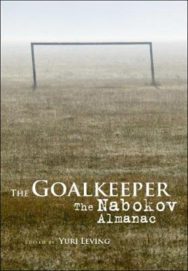 Home > Biography and Autobiography > The Goalkeeper: The Nabokov Almanac

The Goalkeeper: The Nabokov Almanac

Reviews of The Goalkeeper: The Nabokov Almanac

"A virtual cornucopia of Nabokoviana! With its impressive diversity of contributors and stylish format, Yuri Leving's The Goalkeeper promises to be the place to look for the latest on one of the twentieth century's greatest writers and most stimulating thinkers."–David Bethea, Vilas Professor of Slavic Languages, University of Wisconsin-Madison / University of Oxford "The book that emerges is one of those gifts whose first impact produces in the recipient's mind a colored image, a blazoned blur, reflecting with such emblematic force the sweet nature of the contributors."–T.W. Thomas, Professor of Anthropology, Waindell College "The Goalkeeper is a remarkable team effort. It should be required reading for anyone interested in the life and art of Vladimir Nabokov."–Leland de la Durantaye, Gardner Cowles Associate Professor of English, Harvard University

Yuri Leving (PhD The Hebrew University of Jerusalem) is involved in research on visual arts at the University of Southern California, Los Angeles. He has taught at The George Washington University and is now at Dalhousie University. His main field of interest is Russian literature, culture and film. Leving is the author of Train Station – Garage – Hangar: Vladimir Nabokov and Poetics of Russian Urbanism (2004, Short-listed for Andrey Bely Prize). He also co-edited two volumes of articles, Eglantine: Collection of Philological Essays to Honor the Sixtieth Anniversary of Roman Timenchik (2005) and Empire N. Nabokov and Heirs (2006).