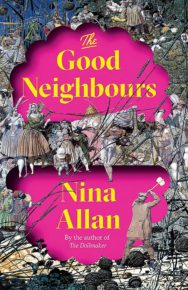 Cath is a photographer hoping to go freelance, working in a record shop to pay the rent and eking out her time with her manager Steve. He thinks her photography is detective work, drawing attention to things that would otherwise pass unseen and maybe he’s right . . .

Starting work on her new project – photographing murder houses – she returns to the island where she grew up for the first time since she left for Glasgow when she was just eighteen. The Isle of Bute is embedded in her identity, the draughty house that overlooked the bay, the feeling of being nowhere, the memory of her childhood friend Shirley Craigie and the devastating familicide of her family by the father, John Craigie.

Arriving at the Craigie house, Cath finds that it’s occupied by Financial Analyst Alice Rahman. Her bid to escape the city lifestyle, the anxiety she felt in that world, led her to leave London and settle on the island. The strangeness of the situation brings them closer, leading them to reinvestigate the Craigie murder. Now, within the walls of the Craigie house, Cath can uncover the nefarious truths and curious nature of John Craigie: his hidden obsession with the work of Richard Dadd and the local myths of the fairy folk.

The Good Neighbours is an enquiry into the unknowability of the past and our attempts to make events fit our need to interpret them; the fallibility of recollection; the power of myths in shaping human narratives. Nina Allan skilfully weaves the imagined and the real to create a magically haunting story of memory, obsession and the liminal spaces that our minds frequent to escape trauma.

Nina Allan is a novelist and short story writer. Her previous fiction has won several prizes, including the British Science Fiction Award for Best Novel, the Novella Award and the Grand Prix de L’Imaginaire for Best Translated Work. She lives and works in Rothesay, on the Isle of Bute. The Dollmaker is her third novel.