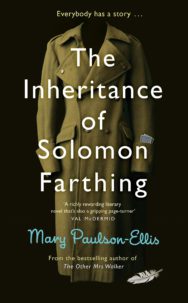 Home > Fiction from Scotland > The Inheritance of Solomon Farthing

The Inheritance of Solomon Farthing

Solomon knew that he had one advantage. A pawn ticket belonging to a dead man tucked into his top pocket – the only clue to the truth . . .

An old soldier dies alone in his Edinburgh nursing home. No known relatives, and no Will to enact. Just a pawn ticket found amongst his belongings, and fifty thousand pounds in used notes sewn into the lining of his burial suit . . .

Heir Hunter, Solomon Farthing – down on his luck, until, perhaps, now – is tipped off on this unexplained fortune. Armed with only the deceased’s name and the crumpled pawn ticket, he must find the dead man’s closest living relative if he is to get a cut of this much-needed cash.

But in trawling through the deceased’s family tree, Solomon uncovers a mystery that goes back to 1918 and a group of eleven soldiers abandoned in a farmhouse billet in France in the weeks leading up to the armistice.

Set between contemporary Edinburgh and the final brutal days of the First World War as the soldiers await their orders, The Inheritance of Solomon Farthing shows us how the debts of the present can never be settled unless those of the past have been paid first . . .

Mary Paulson-Ellis lives in Edinburgh. She has an MLitt in Creative Writing from the University of Glasgow and was awarded the inaugural Curtis Brown Prize for Fiction in 2009 and the Literature Works First Page Prize in 2013. Her debut novel, The Other Mrs Walker was a Times bestseller and Waterstones Scottish Book of the Year. Mary was Highly Commended as a Rising Star in the DIVA Literary Awards and shortlisted as a Breakthrough Author in the Books Are My Bag Readers Awards 2017. In 2016 she was named an Amazon Rising Star. The Inheritance of Solomon Farthing is her second nove